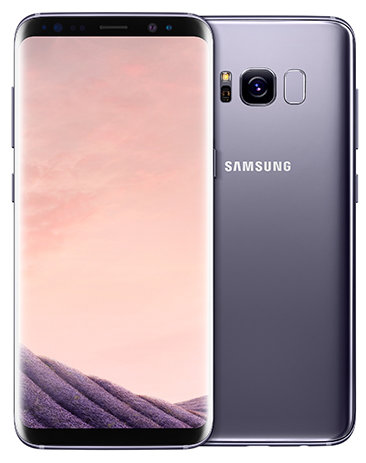 The S8 comes in two sizes: the standard 5.8-inch display, and the larger S8+ with a 6.2-inch display, both of which feature super crisp 1440p Super AMOLED displays. The display is curved around the left and right bezels, similar to last years S7 Edge, which Samsung is calling its Infinity Display. All four corners of the display are also rounded.

Because of the larger displays, both the S8 and S8+ do away with physical buttons on the front of the phones, and instead rely on software buttons. The phones do include a finger print reader, but this has been moved to the back of the devices. The phone also supports iris scanning to unlock the device.

Internal storage comes with 64 GB, but is expandable via a microSD card.  Also inside the phones is a Samsung built 8-core Exynos 8895 processor with 4 GB of RAM.

Battery life should also be acceptable. The S8 has a 3000 mAh battery, while the S8+ has a slightly larger 3500 mAh battery thanks to its larger size. Sadly, the batteries are non user-removable. The phones can be charged using the USB Type-C connector, but also include wireless charging supporting both the AirFuel Inductive and Qi standards.

The rear camera is the same as in the S7, which is 12-megapixels. The front-facing camera has been upgraded to 8-megapixels with auto-focus.

In Australia, the phone is available in Midnight Black, Orchid Grey, or Maple Gold.

The Samsung Galaxy S8 and S8+ are available on all major telcos in the Australian market. See a list of plans available below.